How early retirees are different from the rest of us

Most people are not trust fund babies, but that doesn’t mean retiring early is out of the picture.

Far from it, actually, according to newly released data from Allianz Life’s 2014 LoveFamilyMoney study. Americans planning to retire early share several traits, but coming from a life of privilege is not among them.

Having children also did not appear to affect people’s plans to retire early, even though raising a child to age 18 costs close to a quarter of a million dollars. Some 87 percent of those intending to retire early had children, in line with those not ready to stop working.

Allianz Life commissioned the January 2014 survey of 4,500 people with incomes of more than $50,000, and it has since released several sets of findings. In this batch, 25.9 percent of the respondents said they intend to retire before age 65.

But that doesn’t mean early retirement is out of the question. Here are six of the most common behaviors Allianz Life found that early retirees share:

Have happy marriages. Early retirees tended to describe themselves as in sync with their spouse. Some 76 percent of these people were married, compared to 68 percent of the people who never planned to retire, and they were also more likely to be in their first marriage. And 90 percent of early retirees found it at least somewhat easy to talk about money with a spouse or significant other, well above the 77 percent of people planning to never retire.

Allianz Life’s data are in line with findings in an earlier study for the National Institutes of Health that found a happy marriage played a clear role in a decision to retire early. “After traditional economic factors, marital satisfaction actually turned out to be the strongest predictor of retirement timing,” the researchers wrote.

Appreciate what they have. People planning to retire early were significantly more likely to describe themselves as wealthy or financially comfortable, but that depends on their perspective, Libbe said. “One person might be able to live on $50,000 a year and consider themselves affluent, versus another couple that needs $200,000 a year.”

Keep calm and carry on. Having a fairly calm financial life also seems to encourage people to plan early retirement. Some 46 percent of those people said they had not experienced financial hardship as an adult, versus just 31 percent of those planning to stay in the workforce.

Worry about an early death. On the downside, early retirees were more likely than other workers to worry about dying young. Only 47 percent of them worried about running out of money in retirement, but 53 percent worried that they would not live long after they retired. (Among people who planned to not retire or wait until age 65 or later, at least 53 percent worried about outliving their money.)

Worries about dying young may be valid for some people planning to retire early, but the good news is that leaving the workforce won’t hasten the process. Researchers at the Australian School of Business at the University of New South Wales studied the effect of early retirement on life expectancy and found that “retirement age in itself has no significant effect on subsequent mortality.”

Worry about a Greece default

Higher due to A Greece resolution SPX – Bullish without the crossovers on the RSI, Moving Averages 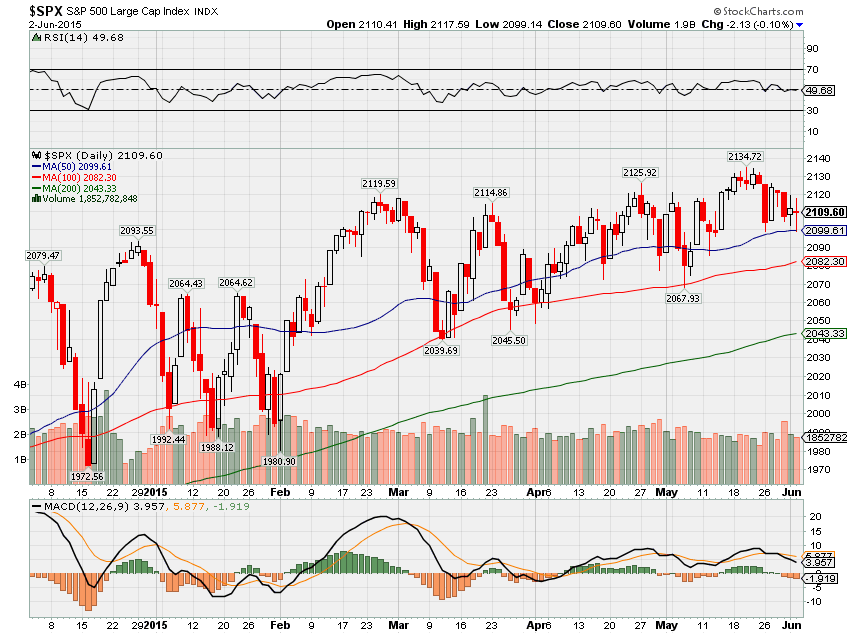 COMP – Bullish on all three indicators Positions expired to change the Collars and Protective puts that I was in.  Right now I am in mostly stock ownership with leap short calls as a little downside protection.